Shale oil resources are still being appraised and assessed worldwide. Every year new estimates are released by national geological surveys of particular countries and oil exploration companies. The assessment efforts are  a difficult task as black shales formed many times in the history of Earth, in various environments and locations around the world.

The map of the appraised and potential shale gas and oil resources is presented below. 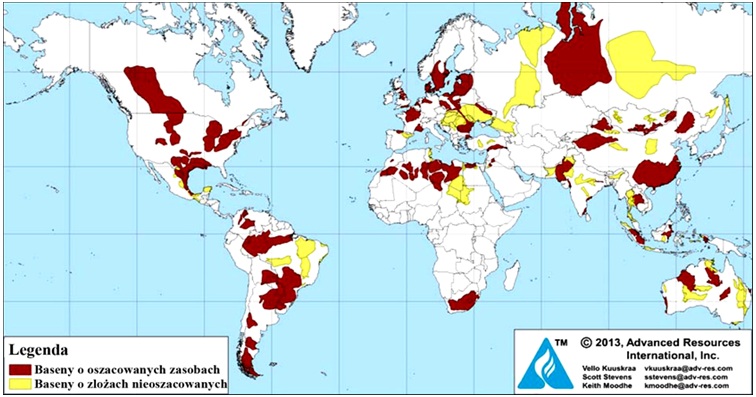 The latest data on total and recoverable shale oil resources are presented in the report by EIA (US Energy Information Agency) and ARI (Advanced Research Institute) Amerykańska Agencja Informacji do Spraw Energii) i ARI (Advanced Research Institute) of 2013. Top ten countries in terms of estimated recoverable resources are presented in the report. The distribution of potentially recoverable resources is shown in the following graph (source: EIA/ARI, 2013). 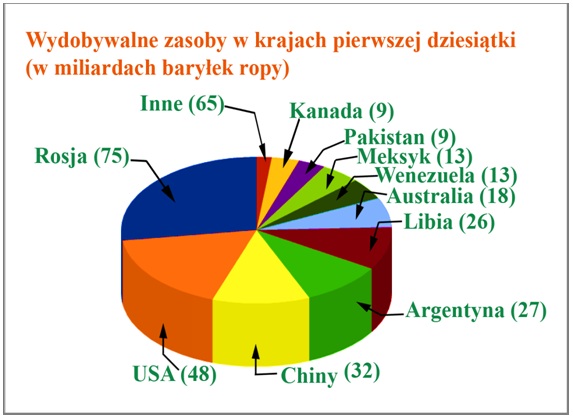 Russia is the leading country with its recoverable resources estimated at 75 billion barrels of oil (bbl). Huge Russian resources make Europe the leading continent in terms of shale oil resources.

Europe is followed by:

Estimated shale oil resources and shale oil plays (basins in which shale sediments and the oil-forming organic matter debris were deposited) are discussed in the following sections.

The largest European resources are found in Russia within the West Siberian Basin. They are located in the shales of the Late Jurassic/Early Cretaceous Bazhenov Formation. Both rocks and organic matter are of marine origin there.

Poland boasts the second largest shale oil reserves in East Europe. However, they are much smaller than the Siberian ones. Considering their importance, they are discussed in a separate chapter.

The resources of Russia's exclave of Kaliningrad and of Lithuania are an extension of Poland's Baltic Basin. Like in Poland, the oil occurs in a Silurian shale formation of marine origin.

The resources of Bulgaria, Romania and Ukraine are located in late Carboniferous shales of the Dnepr-Donetsk Basin, late Silurian shales of the Moesian Platform and in late Jurassic Etropole Formation. It should be noted that only condensate (a mix of oil and freshly formed gas) was reported from the Moesian Platform. All of these resources occur in rocks of marine origin.

The largest oil reserves were found in the shales of Paris Basin (France). Crude oil occurs in both early Jurassic marine sediments and Carboniferous/Permian shales of lacustrine origin. 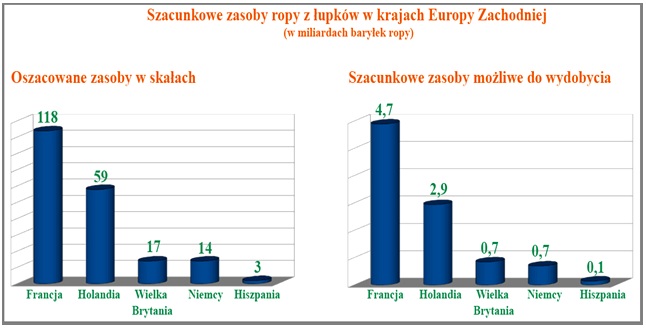 In the Netherlands, shale oil is potentially present in the West Netherlands Basin within Carboniferous lacustrine sediments of the Epen Formation, marine Carboniferous Geverik Formation and the Jurassic Posidonia shales.

In Germany, shale oil accumulations were found in the Lower Saxony Basin within marine Posidonia shale (Jurassic) and the Cretaceous lacustrine Wealden formation.

The United States have the largest shale oil resources in North America. 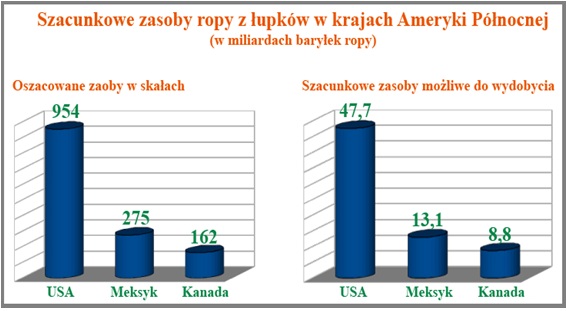 The most important accumulations are those located in Montana and North Dakota within Devonian - early Carboniferous marine sediments of the Bakken Formation (Williston Basin). The Formation extends to Saskatchewan and Manitoba in Canada. 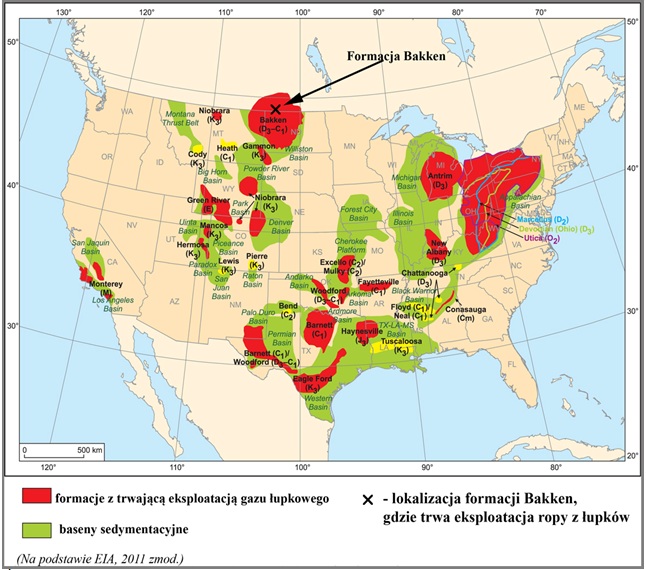 In Mexico, shale oil resources are located in the following basins:

All of the Mexican shale oil formations are of marine origin.

In the Jianghan Basin, oil occurs within the Permian Qixia/Maokou Formation. Some of the deposits are located, again in the form of oil condensate, are located within the Greater Subei Basin (late Ordovician/early Silurian) and a late Permian shale formation. The sediments of these formations were deposited in marine environments. In the Chinese basins of Tarim (late Triassic Ketuer Formation), Junggar (Permian Pingdiquan/Lucaogou Formation and Triassic shales) and Songliao (Cretaceous Quingshankou Formation), oil is present in shale rocks of lacustrine origin.

Oil accumulations in the Indonesian basins of Sumatra, Kutei and Tarakan occur in lacustrine sediments, too. All of the Indonesian oil-bearing rocks formed in the Quaternary.

In Pakistan and India, shale oil accumulations occur in the following basins:

All of the above accumulations occur in marine sediments.

In Turkey, shale oil is present in the Southeast Anatolia Basin (marine Silurian-Devonian Dadas Formation) and in the Thrace Basin (Middle/Upper Eocene Hamitabat Formation). The deposits are of marine origin.

Mongolian oil shales are found in the East Gobi and Tamtsag Basins. In both basins, they occur as a single late Cretaceous Tsagaantsav Formation of lacustrine origin.

In Brazil, oil shales occur in the following basins:

All of the above mentioned formations were deposited in a marine environment.

In Bolivia, Paraguay and Uruguay, the deposits occur within two huge basins:

The oil is present in Devonian shales deposited in a marine environment.

Libya boasts the largest estimated shale oil resources of the African continent. They occur in the following basins:

All of these formations were deposited in marine environments.

In the former two basins oil occurs in the form of the condensate.

Tunisian shale oil resources are located in the Ghadames Basin that Tunisia shares with Libya. They occur in Silurian facies of the Tannezulf Formation (as condensate) and in late Devonian shales.

In Australia, potential shale oil accumulations are located in five basins, of which four are of marine origin. 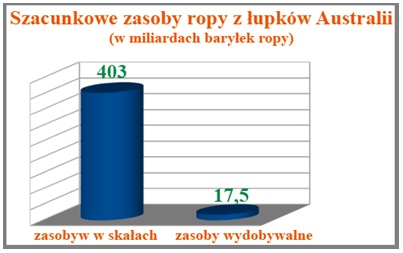 Oil is also present in the shales of the Cooper Basin, within Permian Roseneath-Epsilon-Murteree lacustrine shale formation.

Poland's potential shale oil resources are discussed in the article below titled: "The black gold: shale oil occurrence in Poland". 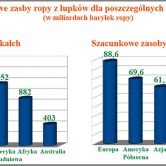