Oil fields in the Carpathian Mountains and the Carpathian Foothills have a long history as the first oil production area in the world. Today, they are nearly depleted.

Crude oil fields of the Polish Lowlands are now of primary economic importance, as they account for almost 74% of the total oil reserves, followed by offshore Baltic fields that account for 20% of the reserves. Oil fields of the Carpathian Mountains and Carpathian Foothills are of secondary importance (they represent 4% of 2% of the total Poland's reserves, respectively).

Oil reservoirs of the Polish Lowlands occur in Permian, Carboniferous and Cambrian formations. They contain medium paraffin oils with paraffin contents ranging from 4.3 to 7.4 %, sulphur content slightly in excess of 1% and densities in the order of 0.857 – 0.870 g/cm3. These are mostly gas-expansion drive massif-based reservoirs underlain by passive water. BMB (after the localities of Barnówko-Mostno-Buszewo) near Gorzow Wielkopolski is the largest oil field. The reserves of that field were over twice as large as the total oil reserves of Poland before its discovery. Other significant oil fields located in the Polish Lowlands are Lubiatów, Grotów and Cychry.

In the Carpathians, oil fields occur in several tectonic units, mostly in the Silesian Unit. These are mainly structural, less frequently structural-lithological, predominantly laminar water-surrounded reservoirs. Initially, oil is produced as a result of dissolved gas expansion and subsequently oil flow is driven by gravity.

The Carpathian crude oil is of the methane type. The density of that sweet oil ranges from 0.750 to 0.943 g/cm3. Paraffin contents range from 3.5 to 7%. The reserves of Carpathian oil fields are small and depend on the size and nature of the accommodating structures. They have been largely depleted after years of production.

In the Carpathian Foredeep, oil reservoirs occur in Miocene formations and Mesozoic platform sediments (mostly Jurassic carbonate rocks, less frequently in Cretaceous sandstones), predominantly under a clayey Jurassic caprock. These are mostly laminar stratigraphically, lithologically or tectonically entrapped reservoirs. Crudes from that regions are attributed to the category of light and medium oils (density ranging from  0.811 to 0.846 g/cm3). Paraffin content ranges from 2.32 to 9.37 % and  that of sulphur from 0.45 to 0,85 %, on average.

Poland's recoverable commercial and non-commercial crude oil reserves in the years 1989 through 2014 are shown in the following figure. 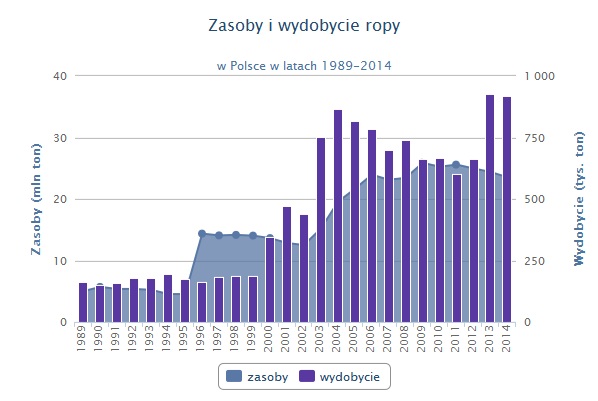 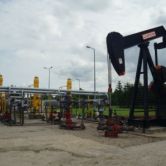