Geophysical well logging (borehole logging,) is a set of borehole investigation methods that are based on special logging tools.

First developed in the beginning of the 20th century, well logging comprises today several tens of methods that involve measurements of natural or induced physical fields in the borehole.

Extreme conditions prevail in a majority of drilling wells: rocks that are penetrated several kilometers below the ground surface have temperatures in the order of hundreds degrees centigrade (controlled by geothermal gradient; in Poland, the temperature is equal to approx. 150oC at the depth of 5 km). Moreover, throughout drilling operations the borehole is normally filled with a mix of water and clay, called drilling mud. A several kilometres high mud column exerts a pressure that is several hundred MPa high at the bottom of the well. Delicate and sensitive detectors or other instruments require special protection, while the measurements have to be adjusted accordingly (considering, for example, that drilling mud infiltrating into the sandstones changes their characteristics, temperatures affect detector sensitivity, etc.).

In addition to mud logging and core sample tests, geophysical well logs provide a wide array of information on penetrated rocks. They are relatively inexpensive to perform and allow for continuous data logging over long intervals of formation rocks that are in their natural position. Nevertheless, logging data are slightly diffuse (especially if the thickness of formation beds is lower than tool resolution). Moreover, logging data should be correlated with the results of laboratory tests of core samples, especially in early stages of exploration.

Coring operations are time consuming and laboratory test results are not readily available. On the other hand, laboratory data are very accurate and the range of available tests is in practice infinite. Since cores are sampled in specific points only (over a few or several centimetres out of a several kilometres deep borehole), laboratory data have to be correlated with respective logging curves. For example, TOC determinations in core samples are correlated with resistivity and acoustic logs.

Wireline logging  (WL) measurements consist of lowering the logging into usually open wellbore on a wireline. Measurements are normally conducted on the way out of the wellbore (borehole temperature logging  measurements are made on the way down so as to not disturb the column of mud which has the temperature of the surrounding rocks). The signal is transmitted through multiple conductor wireline to the surface and recorded. The logging while drilling (LWD) measurement techniques have been developed since 1980’s. Logging tools are integrated into the rotating bottom assembly. Some basic data are transmitted to the surface using telemetry, the other data are recorded in the tool memory and then retrieved on the surface.

An appropriate correlation of all tests and measurements made allows for the determination of such important elements as, for example, full lithostratigraphic profile of the well, sedimentary rock depositional environment, the oil-water contact, percentage share of particular minerals, mechanical modulus, porosity, permeability or hydrocarbon content in prospective zones.

The parameters of key importance in shale gas exploration that are determinable by geophysical well logging include:

The logs of a shale rich in organic matter display a higher level of radioactivity (uranium has an affinity for organic matter), a higher electrical resistivity and porosity (as indicated by lower velocity of acoustic waves, lower volumetric density or a higher neutron porosity). By appropriate correlation of resistivity and porosity sensitive logs, and having calibrated them against core samples, we are able to establish the profile of TOC percentage content in the well.

Interpreted logging data are the inputs to dynamic three-dimensional models of petroleum systems as parameters of the sub-divided rock intervals and (along with vertical seismic profiling) are used in time-depth conversion of seismic data.

New methods that have been developed since late 1980's provide useful information for shale oil and gas exploration: 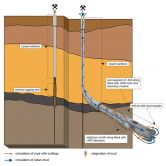 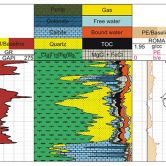 Hydraulic Fracturing Recipe
The secrets of the gas production kitchen – how to make hydraulic fracturing successfully?